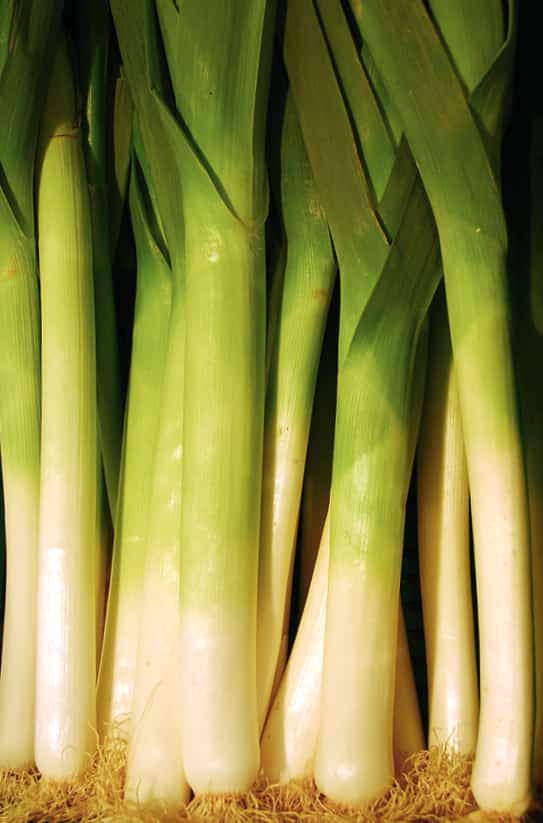 Leeks are an excellent source of a few nutrients, including Vitamin C and calcium. It also contains significant amounts of dietary fiber, Vitamin A, iron, potassium, Vitamin B6 and manganese.

There is no significant amounts of saturated fat or cholesterol in leeks.

See the Leeks Nutrition Chart for complete recommended daily values.
The specific nutritional values from USDA is for: Leeks, , raw.

Leeks have 54 calories per leek or 61 calories for every 100 grams. Most of its calories are from carbohydrates.

There is no significant amounts of starch in leeks.

A small portion, or 5% the calories in Leeks are from fat. Leeks are very low in total fat, with 0.3 grams per leek. Most of the fat in leeks are healthier unsaturated fats.

Some other vegetables with similar calories to leeks by weight:

One leek has 1.3 grams of protein or about 3% of daily recommended intake. Although leeks are relatively low in protein, it does contain all 9 essential amino acids at small amounts.

There is no significant amounts of tryptophan or methionine in leeks.

Some other vegetables with similar amounts of protein to leeks by weight:

Vitamins and Minerals in Leeks

An good source of nutrients, leeks contain abundant amounts of Vitamin C and calcium. In fact, a single leek contains 14% of recommended daily values or 10.7 milligrams of Vitamin C.

Similar to Leeks for Vitamin C

Here are some other vegetables with similarly abundant amounts of Vitamin C to leeks:

Flavonoids and Carotenoids in Leeks [3]

Leeks contain a number of healthy phytonutrients and antioxidants, specifically carotenoids beta-carotene and lutein + zeaxanthin and flavonoids kaempferol and myricetin. In one leek of leeks:

Leeks are in the top 10% of most popular ingredients for recipes. Leeks can be consumed raw and is often sliced, chopped or washed before cooking or serving. Most recipes call for one or two leeks.

Friends and Relatives of Leeks